Wild realm of the Fey

The First World is a location in the Pathfinder universe outside the Prime Material Plane of existence.

The Material Plane was created by primordial gods as a complex receptacle and testing ground for souls, as part of a larger process to distribute positive energy between gods and planes of the Outer Sphere. The First World is a predecessor of the Material Plane, created as a first attempt at a Material Plane and then directly overwritten by the plane as it exists today.

Travel to and from the First World is generally accomplished via magic that only works in places where the boundaries between the planes are thin. On Golarion, these are generally wild places far from civilization, often marked by mounds, stones, or rings of earth or mushrooms. One such connection exists in the Lands of the Linnorm Kings, which explains that region's large fey population. The so-called Forestheart rift is in the depths of the Grungir Forest. Another breach into the First World exists just outside the Thuvian city of Lamasara, in the deep forest near the Junira River. The Anvanory family had legally owned the land around the breach, and cut many trees when building their manor house and fields. The veil to the fey realm is also said to be especially thin in the Stolen Lands region bordering the River Kingdoms, Brevoy and Numeria.

The First World is home to all manner of strange creatures, apparently prototype versions of the plants and animals of the Material Plane, although its chief inhabitants are the fey. The most powerful are the eight (formerly nine) creatures known as the Eldest and their fearsome living weapons, the Tane.

However, what all the natives of the First World have in common is that (barring extreme circumstances, such as the intervention of powerful magic) they do not die when on that plane. Those who are “killed” reform in time from the substance of the plane. This discourages them from visiting other planes—since they do not reform outside the First World, but are also not eligible for any form of afterlife—and can also make them somewhat reckless when it comes to lives in the First World (including the lives of visitors, which can have tragic consequences). 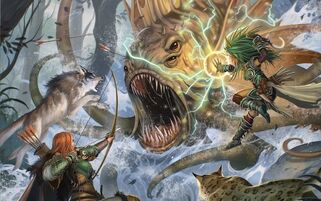 Bell of Lost Souls
Add a photo to this gallery
Retrieved from "https://pathfinderkingmaker.fandom.com/wiki/First_World?oldid=7786"
Community content is available under CC-BY-SA unless otherwise noted.