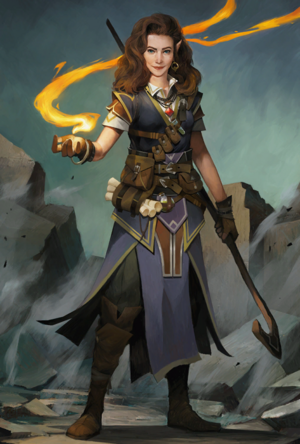 Half-Elf are one of the races available to the player in Pathfinder: Kingmaker.

Often the victims of unfounded stigmatization in communities of primarily human or elven populations, half-elves typically find Brevoy a welcoming land. The Chelish and Taldan upper classes have long exiled their embarrassing—if common—illegitimate half-elf progeny to the unruly River Kingdoms, and as a result, many of the region's half-elves claim some noble heritage (even if such claims aren't formally recognized). Other half-elven settlers in the region are the result of trysts between locals and elves from nearby Kyonin. Regardless of their origins, half-elves find their adaptable nature well suited to Brevic life, especially those settlements in which adherence to local custom is of paramount concern. Many half-elves rise to positions of power thanks to their ability to roll with political changes and bypass unexpected social impediments.

Half-elves stand taller than humans but shorter than elves. They inherit the lean build and comely features of their elven lineage, but their skin color is normally dictated by their human side. While half-elves retain the pointed ears of elves, theirs are more rounded and less pronounced. Their eyes tend to be human-like in shape, but feature an exotic range of colors from amber or violet to emerald green and deep blue. This pattern changes for half-elves of drow descent, however. Such elves are almost unfailingly marked with the white or silver hair of the drow parent, and more often than not have dusky gray skin that takes on a purplish or bluish tinge in the right light, while their eye color usually favors that of the human parent.

Their lack of a unified homeland and culture forces half-elves to remain versatile, able to conform to nearly any environment. While often considered attractive to both races for the same reasons as their parents, half-elves rarely fit in with either humans or elves, as both races see too much evidence of the other in them. This lack of acceptance weighs heavily on many half-elves, yet others are bolstered by their unique status, seeing in their lack of a formalized culture the ultimate freedom. As a result, half-elves are incredibly adaptable, capable of adjusting their mindsets and talents to whatever societies they find themselves in. Even half-elves welcomed by one side of their heritage often find themselves caught between cultures, as they are encouraged, cajoled, or even forced into taking on diplomatic responsibilities between human and elven kind. Many half-elves rise to the occasion of such service, seeing it as a chance to prove their worth to both races. Others, however, come to resent the pressures and presumptions foisted upon them by both races and turn any opportunity to broker power, make peace, or advance trade between humans and elves into an exercise in personal profit.

Half-elves understand loneliness, and know that character is often less a product of race than of life experience. As such, they are often open to friendships and alliances with other races, and less likely than most to rely on first impressions when forming opinions of new acquaintances. While many races join together to produce mixed offspring of notable power, such as half-orcs, half-dragons, and half-fiends, half-elves seem to have a unique position in the eyes of their progenitors and the rest of the world. Those humans who admire elvenkind see half-elves as a living link or bridge between the two races. But this attitude often foists unfair expectations and elevated standards upon half-elves, and quickly turns to derision when they do not live up to the grand destinies that others set for them. Additionally, those half-elves raised by or in the company of elves often have the human half of their parentage dubbed a mere obstacle, something to be overcome with proper immersion and schooling in the elven ways, and even the most well-meaning elven mentors often push their half-elven charges to reject a full half of themselves in order to "better" themselves.

Dwarves, despite their traditional mistrust of elves, see a half-elf's human parentage as something hopeful, and treat them as half-humans rather than half-elves. Additionally, while dwarves are long-lived, the lifespan of the stout folk is closer to a half-elf's own than that of either of her parents. As a result, half-elves and dwarves often form lasting bonds, be they ones of friendship, business, or even competitive rivalry.

Gnomes and halflings often see half-elves as a curiosity. Those half-elves who have seen themselves pushed to the edges of society, truly without a home, typically find gnomes and halflings frivolous and worthy of disdain, but secretly envy their seemingly carefree ways. Clever and enterprising gnomes and halflings sometimes partner with a half-elf for adventures or even business ventures, using the half-elf's participation to lend their own endeavors an air of legitimacy that they cannot acquire on their own.

Perhaps the most peculiar and dichotomous relations exist between half-elves and half-orcs. Those half-orcs and half-elves who were raised among their non-human kin normally see one another as hated and ancient foes. However, half-elves who have been marginalized by society feel a deep, almost instant kinship with half-orcs, knowing their burdens are often that much harder because of their appearance and somewhat brutish nature. Not all half-orcs are inclined or able to understand such empathy, but those who do often find themselves with a dedicated diplomat, liaison, and apologist. For their own part, half-orcs usually return the favor by acting as bodyguards or intimidators, and take on other roles uniquely suited to their brawny forms.

Half-elves' isolation strongly influences their characters and philosophies. Cruelty does not come naturally to them, nor does blending in or bending to the societal convention—as a result, most half-elves are chaotic good. Half-elves' lack of a unified culture makes them less likely to turn to religion, but those who do generally follow the common faiths of their homeland. Others come to religion and worship later in their lives, especially if they have been made to feel part of a community through faith or the work of clerical figures. Some half-elves feel the pull of the divine but live beyond the formal religious instruction of society. Such individuals often worship ideas and concepts like freedom, harmony, or balance, or the primal forces of the world. Still, others gravitate toward long-forgotten gods, finding comfort and kinship in the idea that even deities can be overlooked.

Half-elves tend to be itinerants, wandering the lands in search of a place they might finally call home. The desire to prove themselves to the community and establish a personal identity—or even a legacy—drives many half-elf adventurers to lives of bravery. Some half-elves claim that despite their longevity, they perceive the passage of time more like humans than elves, and are driven to amass wealth, power, or fame early on in life so they may spend the rest of their years enjoying it.

Ability Score Racial Traits: Half-elf characters gain a +2 bonus to one ability score of their choice at creation to represent their varied nature.

Type: Half-elves are humanoid creatures with both the human and the elf subtypes.

Size: Half-elves are Medium creatures and have no bonuses or penalties due to their size.

Base Speed: Half-elves have a base speed of 30 feet.

Low-Light Vision: Half-elves can see twice as far as humans in conditions of dim light.

Elf Blood: Half-elves count as both elves and humans for any effect related to race.

Multitalented: Half-elves choose two favored classes at first level and gain +1 hit point or +1 skill point whenever they take a level in either one of those classes.