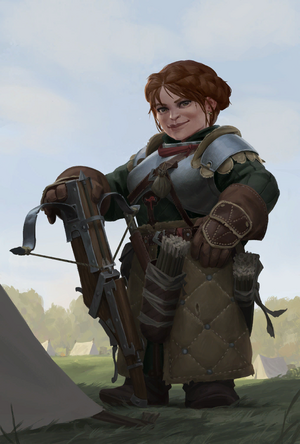 Ranger is a class in Pathfinder: Kingmaker.

For those who relish the thrill of the hunt, there are only predators and prey. Be they scouts, trackers, or bounty hunters, rangers share much in common: unique mastery of specialized weapons, skill at stalking even the most elusive game, and the expertise to defeat a wide range of quarries. Knowledgeable, patient, and skilled hunters, these rangers hound man, beast, and monster alike, gaining insight into the way of the predator, skill in varied environments, and ever more lethal martial prowess. While some track man-eating creatures to protect the frontier, others pursue more cunning game — even fugitives among their own people.

Role: Rangers are deft skirmishers, either in melee or at range, capable of skillfully dancing in and out of battle. Their abilities allow them to deal significant harm to specific types of foes, but their skills are valuable against all manner of enemies.

At 2nd level, a ranger must select one of the following combat styles. Each combat style grants its own list of feats that can be selected as a #Combat Style Feat.

Each time a ranger gains a new Favored Enemy, he may pick one type from the following list.

Each time a ranger gains a new Favored Terrain, he may pick one terrain type from the following list.

Note that some locations have a terrain type of Mountainous or Swamp. These terrain types cannot be selected as a Favored Terrain.