Sparsely populated
The Stolen Lands is the primary setting of Pathfinder: Kingmaker. It is located south of Brevoy, east of Numeria and northeast of the River Kingdoms, bordering Pitax and Mivon.

Across the northern frontier of the River Kingdoms runs a hinterland not even the most brazen bandit lords dare to claim. Sharing borders with strange barbarians and the scions of a proud kingdom, this wilderness invites few intruders, out of fear of provoking the ire of empires.

For untold decades this land has lain fallow, left to the devices of nature and deadly beasts, while strange things lurk amid its swamps, forests, and peaks, and the remnants of an ancient, near-forgotten history sleeps amid ruins and weeds. These are the Stolen Lands, a lordless realm having defied untold conquerors, yet ripe with potential for any bold enough to prove themselves its masters. There is no clear reason as to why the Stolen Lands has proven so difficult to settle over the centuries, but scholars have noted that the veil between the Material Plane and the First World, another plane of existence, is unusually thin in the region. Some theorize that this connection has made the area difficult to tame.

The regions called the Stolen Lands takes its name from Brevoy, which claims this realm as rightfully its own. The fertile plains of the Brevic demesne of Rostland spill into the region, coloring the fractious nation’s claim on the wilderness. This makes the border between the River Kingdoms and the northern realm hotly contested, with the descendants of Choral the Conqueror—the unifier of modern Brevoy—and ancient Rostlandic nobles claiming right to lands as far south as Hooktongue Slough and the Kamelands, and some brash families asserting their reach extends as far south as the bandit city of Pitax.

In truth, the Stolen Lands belong to no one, and are stolen from no one. Many have tried to claim them, but the abandoned ruins that dot the swath of wilderness stand as testaments to the difficulty of ruling these savage lands. They have remained wild with a fierce tenacity, a haven for monsters and criminals and dangerous secrets, and as such have posed a menace to their neighboring nations as long as anyone can remember.

Yet these times of relative calm in the Stolen Lands are coming to an end. Spurred to action, in part by an increase in aggression among the bandits and barbarians of the Stolen Lands and by building political tensions to the north, the swordlords of Restov have sent agents and colonists into the disputed region to explore and settle and, if need be, conquer. The establishment of new puppet kingdoms beholden to Restov’s swordlords and the rest of Rostland, would not only bring freedom from banditry and raids along Rostland’s southern border, but also the resources and clout needed to make a play for a higher station in Brevoy’s complicated political scene.

If all goes well, the just return of the Stolen Lands to Brevic control could well give Rostland the footing it needs to challenge the Surtova hold on the crown. Working quickly and quietly through pawns and minions, numerous agents have set into motion four separate campaigns against the Stolen Lands, each on the surface appearing to address minor elements of banditry or securing of trade routes, while in fact they are preparing the way for annexation and conquest of the entire region.

Beyond the plains to the east stretch the craggy forests of the Narlmarches and rugged hill country that gradually rises in the wall-like mountains called the Tors of Levenies. To the west, the many rivers and bogs of the Hooktongue Slough transform the region’s lowlands into a vast swamp, eventually giving way to the Spinefields, weedy plains threaded over with bony crags, with the forest of Thousand Voices and the steeps around Mount Branthlend beyond. The Stolen Lands can be divided into four larger areas, each with multiple regions that can be annexed into your barony and kingdom:

Slow beginnings of a fledgling kingdom

Map over in-game locations
Add a photo to this gallery 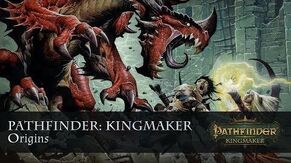 Dev Diary - About Golarion and the Stolen Lands
Add a photo to this gallery
Retrieved from "https://pathfinderkingmaker.fandom.com/wiki/Stolen_Lands?oldid=8681"
Community content is available under CC-BY-SA unless otherwise noted.