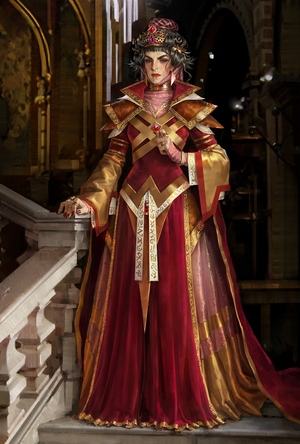 Wizard is a class in Pathfinder: Kingmaker. Beyond the veil of the mundane hide the secrets of absolute power. The works of beings beyond mortals, the legends of realms where gods and spirits tread, the lore of creations both wondrous and terrible — such mysteries call to those with the ambition and the intellect to rise above the common folk to grasp true might. Such is the path of the wizard. These shrewd magic-users seek, collect, and covet esoteric knowledge, drawing on cultic arts to work wonders beyond the abilities of mere mortals. While some might choose a particular field of magical study and become masters of such powers, others embrace versatility, reveling in the unbounded wonders of all magic. In either case, wizards prove a cunning and potent lot, capable of smiting their foes, empowering their allies, and shaping the world to their every desire.

Role: While universalist wizards might study to prepare themselves for any manner of danger, specialist wizards research schools of magic that make them exceptionally skilled within a specific focus. Yet no matter their specialty, all wizards are masters of the impossible and can aid their allies in overcoming any danger.

Wizards cast each level of spell and can prepare an equivalent number as per listed on the table below.

Note: Spells per day table does not include bonus spells granted by specialization or casting ability score

Wizards are proficient with the club, dagger, heavy crossbow, light crossbow, and quarterstaff, but not with any type of armor or shield. Armor interferes with a wizard's movements, which can cause his spells with somatic components to fail.

At 1st level, wizards form a powerful bond with an object or a creature. This bond can take one of two forms: a familiar or a bonded object.

Wizards can cast a number of cantrips, or 0-level spells. These spells are cast like any other spell, but they are not expended when cast and may be used again.

A wizard can choose to specialize in one school of magic, gaining additional spells and powers based on that school. This choice must be made at 1st level, and once made, it cannot be changed. A wizard that does not select a school receives the universalist school instead.

Each arcane school gives the wizard a number of school powers. In addition, specialist wizards receive an additional spell slot of each spell level he can cast, from 1st on up. Each day, a wizard can prepare a spell from his specialty school in that slot. This spell must be in the wizard's spellbook. A wizard can select a spell modified by a metamagic feat to prepare in his school slot, but it uses up a higher-level spell slot. Wizards with the universalist school do not receive a school slot.

A wizard that chooses to specialize in one school of magic must select two other schools as his opposition schools, representing knowledge sacrificed in one area of arcane lore to gain mastery in another. A wizard who prepares spells from his opposition schools must use two spell slots of that level to prepare the spell.

At 1st, 5th, 10th, 15th, and 20th level, a wizard gains a bonus feat. At each such opportunity, he can choose a metamagic feat, spell focus feat or any other spellcaster feat. The wizard must still meet all prerequisites for a bonus feat, including caster level minimums.

The conjurer focuses on the study of summoning monsters and magic alike to bend to his will.

Whenever you cast a conjuration (summoning) spell, increase the duration by a number of rounds equal to 1/2 your wizard level (minimum 1). This increase is not doubled by Extend Spell.

As a standard action you can unleash an acid dart targeting any foe within 30 feet as a ranged touch attack. The acid dart deals 1d6 points of acid damage + 1 for every two wizard levels you possess. You can use this ability a number of times per day equal to 3 + your Intelligence modifier. This attack ignores spell resistance.

Evokers revel in the raw power of magic, and can use it to create and destroy with shocking ease.

Whenever you cast an evocation spell that deals hit point damage, add 1/2 your wizard level to the damage (minimum +1). This bonus only applies once to a spell, not once per missile or ray, and cannot be split between multiple missiles or rays. This bonus damage is not increased by Empower Spell or similar effects. This damage is of the same type as the spell. At 20th level, whenever you cast an evocation spell you can roll twice to penetrate a creature's spell resistance and take the better result.

As a standard action you can unleash a force missile that automatically strikes a foe, as magic missile. The force missile deals 1d4 points of damage plus the damage from your intense spells evocation power. This is a force effect. You can use this ability a number of times per day equal to 3 + your Intelligence modifier.

At 8th level, once per day you can create a wall of energy. You can choose fire, cold, acid or electricity damage. The elemental wall otherwise functions like wall of fire. At 12th level and every 4 levels thereafter, you can use this ability one additional time per day, to a maximum of 4 times at level 20.

The dread and feared necromancer commands undead and uses the foul power of unlife against his enemies.

You receive Turn Undead as a bonus feat. You can channel energy a number of times per day equal to 3 + your Intelligence modifier, but only to use this feat. The DC to save against these feats is equal to 10 + 1/2 your wizard level + your Charisma modifier. At 20th level, undead cannot add their channel resistance to the save against this ability.

As a standard action, you can make a melee touch attack that causes a living creature to become shaken for a number of rounds equal to 1/2 your wizard level (minimum 1). If you touch a shaken creature with this ability, it becomes frightened for 1 round if it has fewer Hit Dice than your wizard level. You can use this ability a number of times per day equal to 3 + your Intelligence modifier.

At 8th level, you gain blindsight to a range of 10 feet for a number of rounds per day equal to your wizard level. This ability only allows you to detect living creatures and undead creatures. This sight also tells you whether a creature is living or undead. Constructs and other creatures that are neither living nor undead cannot be seen with this ability. The range of this ability increases by 10 feet at 12th level, and by an additional 10 feet for every four levels beyond 12th. These rounds do not need to be consecutive.

Transmuters use magic to change the world around them.

As a standard action you can strike with a telekinetic fist, targeting any foe within 30 feet as a ranged touch attack. The telekinetic fist deals 1d4 points of bludgeoning damage + 1 for every two wizard levels you possess. You can use this ability a number of times per day equal to 3 + your Intelligence modifier.

The abjurer uses magic against itself, and masters the art of defensive and warding magics.

As a standard action, you can create a 10-foot-radius field of protective magic centered on you that lasts for a number of rounds equal to your Intelligence modifier. All allies in this area (including you) receive a +1 deflection bonus to their Armor Class. This bonus increases +1 for every five wizard levels you possess. You can use this ability a number of times per day equal to 3+ your intelligence modifier.

At 6th level, you gain an amount of energy absorption equal to 3 times your wizard level per day. Whenever you take energy damage, apply immunity, vulnerability (if any), and resistance first and apply the rest to this absorption, reducing your daily total by that amount. Any damage in excess of your absorption is applied to you normally.

Diviners are masters of remote viewing, prophecies, and using magic to explore the world.

You receive a bonus on initiative checks equal to 1/2 your wizard level (minimum +1). At 20th level, anytime you roll initiative, assume the roll resulted in a natural 20.

When you activate this school power, you can touch any creature as a standard action to give it an insight bonus on all of its attack rolls, skill checks, ability checks, and saving throws equal to 1/2 your wizard level (minimum +1) for 1 round. You can use this ability a number of times per day equal to 3 + your intelligence modifier.

At 8th level, you can utter a prediction of the immediate future. While your foretelling is in effect, you emit a 30-foot aura of fortune that aids your allies or hinders your enemies, as chosen by you at the time of the prediction. If you choose to aid, you and your allies gain a +2 luck bonus on ability checks, attack rolls, caster level checks, saving throws, and skill checks. If you choose to hinder, your enemies take a -2 penalty on those rolls instead. You can use this ability for a number of rounds per day equal to your wizard level. These rounds do not need to be consecutive.

The enchanter uses magic to control and manipulate the minds of his victims.

You gain a +2 enhancement bonus on Persuasion checks and saving throws against enchantment spells. This bonus increases by +1 for every five wizard levels you possess, up to a maximum of +6 at 20th level.

You can cause a living creature to become dazed for 1 round as a melee touch attack. Creatures with more Hit Dice than your wizard level are unaffected. You can use this ability a number of times per day equal to 3 + your intelligence modifier.

At 8th level, you can emit a 30-foot aura of despair for a number of rounds per day equal to your wizard level. Enemies within this aura take a -2 penalty on ability checks, attack rolls, damage rolls, saving throws, and skill checks. These rounds do not need to be consecutive. This is a mind-affecting effect.